Geraldton cannot afford to be sidestepped by bypass route 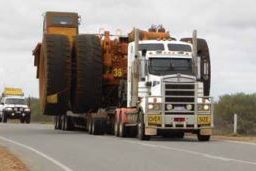 Member for Geraldton Ian Blayney is hopeful that progress will soon be made regarding the Dongara to Northampton coastal route but is concerned proposed routes will not result in the best outcome for Geraldton businesses or the local economy.

“With Labor having had considerable time to determine the best route, it’s about time they finally stopped dragging their heels on this issue and started making some headway,” Mr Blayney said.

“In response to my grievance on the issue earlier last year, the Minister advised the Alignment Selection Study for the bypass would be complete at the start of year, yet we are still waiting for an announcement on the matter.

“The urgency of this project needs to be recognised and I am eager for announcements on this project to be revealed.

According the City, it is likely Option 6 and Option 1 of the proposed routes outlined in Main Roads’ study overview will be implemented, and Mr Blayney said this would be welcome news for residents north of Geraldton but not for businesses who rely on income from visitors travelling through the city.

“Having presented a petition in Parliament advocating for Option 6 as the preferred route for the northern section of the bypass last year, it will certainly be a win for the Chapman Valley community if Option 6 is indeed secured, and it will be pleasing that their advocacy will not have been in vain.

“However, with the southern route earmarked as option 1, Geraldton’s economy will be severely disadvantaged because road users will start to head east at a distance much too far south of the city,” Mr Blayney said.

“Not only would this decision illustrate Labor’s lack of regard for local small businesses who will suffer if there are less visitor stops, but it also shows the decision does not account for freight into Geraldton, which will see slower delivery times if this route goes ahead.

“The business community agree that road safety is a top priority, and a bypass is certainly welcomed, but one that veers off to the east closer to town would ensure our business and tourism industries are not put at substantial disadvantage.