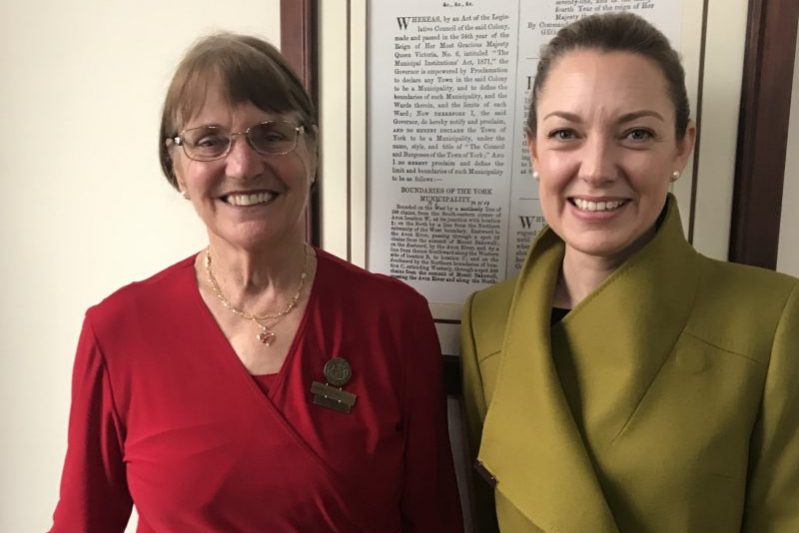 A long term local, Mrs Saunders has given back to the York community for well over fifty years through fundraising, serving on sporting committees as well as coaching and assisting with the planning of York’s sporting complex.

“People like Lorna are an invaluable asset in our regional communities, giving selflessly to make them a better place to live, work and visit,” Ms Davies said.

“There is no doubt she is worthy of the honour, and this was expressed many times over by those that joined Lorna and her family for the ceremony at the York Town Hall on Thursday.

“Not only has she volunteered for local sporting associations but she has given more than thirty years to St John Ambulance, as well as having played a pivotal role in the development of the aged care facility, Pioneer Memorial Lodge.”

In 2017 Mrs Saunders was admitted to The Order of St John in recognition of her outstanding service to York and the wider community for her voluntary work. She has held every position at the sub branch and continues to serve and is currently a member of the building committee for the rebuild of their facilities.

Ms Davies said it was a mark of Mrs Saunders worthiness that she acknowledged her husband, family and the people she worked with in the community in receiving the honour.

“Mrs Saunders spoke beautifully at the ceremony and it was a real privilege to join her and the community to celebrate this auspicious event,” she said.

The Council of the Shire of York resolved by absolute majority at its Ordinary Meeting held on 27th May 2019 to bestow the award upon Mrs Saunders.

A maximum of four living persons at any one time may hold the title ‘Freeman of the Shire of York’, and only ten people have received the honour to date.