The Labor Government is under increasing pressure to fund the South West Emergency Rescue Helicopter’s operation beyond June 2018.

Under questioning yesterday from Nationals WA Member for Warren-Blackwood Terry Redman, the Minister for Emergency Services gave no assurance that the State Government would fund the life-saving service past this financial year.

“Residents of the South West remain in the dark as to the ongoing status of this essential lifesaving service while the Minister tries to buy time by saying the funding will be considered in the Mid Year Review,” he said.

“That is too late. The resources are already there in Royalties for Regions to continue funding the South West Emergency Rescue Helicopter.

“The truth is regional Labor MPs are powerless against their city-centric gang of 43 metropolitan members, who are only interested in funding Perth election promises.

Mr Redman said failing to continue operational funding for the rescue chopper was akin to criminal negligence and the ultimate cost would be human life.

Through Royalties for Regions, The Nationals in Government funded a $30 million Bunbury base and operating costs for the chopper over four years.

In 2016 more than 400 missions were flown by the chopper from its Bunbury base. Approximately 65 per cent were responding to car crashes.

The chopper, which is managed by the Department of Fire and Emergency Services, is available 24 hours a day, equipped to fly in all weather conditions and can be deployed for search and recovery missions.

Nationals WA Member for the South West Colin Holt MLC, who is leading a community campaign to have funding for the chopper extended, said it was incomprehensible that the State was ignoring pleas to keep the service alive.

“We’ve had more than 3600 people sign our petition online and hundreds more sign the petition at local shops,” he said.

“The voice of the South West community, including the emergency services sector, are backing The Nationals WA push to reinstate funding for this life saving service.

“The McGowan Government needs to understand that this service saves lives.

“Without it the families of many more unfortunate victims of accidents and emergencies would be dealing with much more tragic circumstances.” 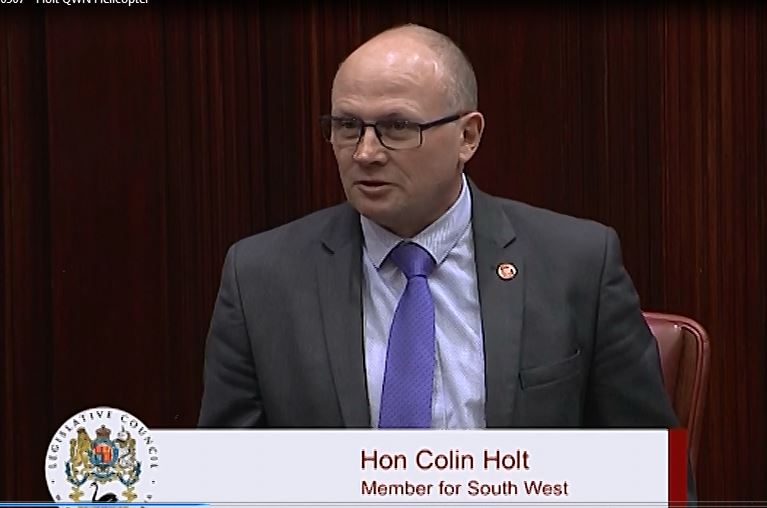