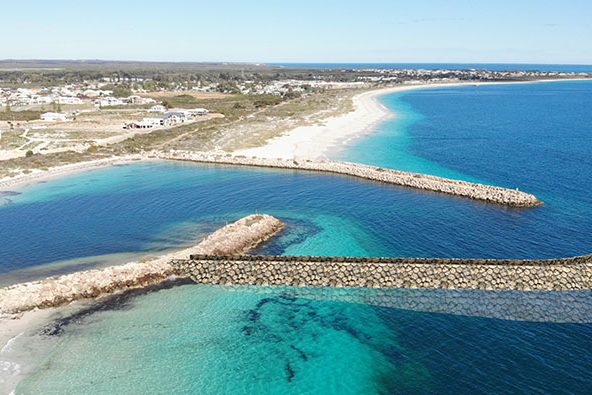 Immediate action is needed to build the 150 meter spur groyne addition to the northern breakwater of the Jurien Bay Marina, according to Member for Moore, Shane Love MLA.

Mr Love said six years of data collection and research by the Department of Transport noted that the boat harbour entrance needed to be reconfigured and recommended a spur groyne to be the most appropriate solution.

“This is a problem that has dragged on far too long with dire environmental consequences and Labor need to immediately make funds available,” he added.

“Fish kills in Jurien Bay are doing little to encourage visitors to the town or potential property investment on nearby development sites.”

Mr Love said he had attended the Blessing of the Fleet in Jurien Bay on 14 November and the stench of the water was extremely unpleasant.

“Residents and visitors deserve better than the rotten egg smell resulting from anoxic conditions due to decomposing seagrass,” he said.

“Labor have repeatedly underspent on Royalties for Regions and diverted these funds to Perth projects – the regions need investment in infrastructure to encourage further investment and visitation.

“In September 2019 I called on Transport Minister, Hon Rita Saffioti to use unspent Royalties for Regions funding to build the spur groyne following another fish kill. “I have again called on the Transport Minister to immediately address the marina which is a state asset that must be maintained.”

Mr Love said a new dredging program expected to take place between 30 November and April 2021 was merely a band-aid solution.

“In fact this dredging should have been scheduled six months ago so as to not interfere with recreational boating in Jurien Bay over the summer holiday period,” he added.

Mr Love first raised the issue of the Jurien Bay Marina with a grievance to then Transport Minister Troy Buswell in November 2013. In May 2014,  he tabled a petition in parliament with nearly 2,000 signatures calling for government action. A  dredging program was instigated and the Jurien Boat Harbour Steering Committee formed in 2014 to study and plan for the reconfiguration of the boat harbour, a committee which Mr Love chaired.

“This committee was disbanded by Minister Saffioti when Labor took government and little progress seems to have been made towards a real solution,” he said.

“The Nationals in government will fix the marina for once and for all.”