The Nationals WA Member for the Agricultural Region and former Head Boy at Central Midlands Senior High School and Moora Residential College Hon Martin Aldridge MLC says regional WA will continue to fight for its only residential college between Perth and Geraldton.

Only three months ago, Labor Member for the Agricultural Region Darren West told parliament he was proud to advocate MetroNet as it was going to “make life easier for everybody in the state”.

Mr Aldridge said he was still baffled on how Labor’s commitment to MetroNet was providing any benefit to regional people, when it is unwilling to consider maintaining and keeping the college open in an attempt to fund its pre-election promises.

“Mr West stood in Parliament and announced on more than one occasion in November that the MetroNet project would ‘profoundly benefit people in regional Western Australia,” Mr Aldridge said.

“It’s hard not to be cynical about these cuts in country WA when the dollars seem to be flowing freely in Perth.

“The savings the State will make from the closure of the college next year will allow Labor to build just 10 metres of railway line in Perth – to build it, not operate it.”

Speaking at the rally to save Moora Residential College last week, Mr Aldridge said it was simply unacceptable for them to declare that MetroNet would ‘profoundly benefit’ regional WA, and in the next breath cut funds to country WA to drive Perth projects.

“Labor would have you believe the decision to close Moora Residential College is all part of a plan to fix the State’s finances and pay back debt,” Mr Aldridge said.

“The State Government will not pay a single dollar of debt off in the next three years and in fact will add $10.8 billion to state debt in that time.

“Moora Residential College can be afforded by the State.”

Premier Mark McGowan was happy to flaunt himself walking his daughter to school, hand-in-hand for her first day of school, while turning a blind eye to families in regional WA.

“If Labor close Moora Residential College, there will be no residential boarding option between Perth and Geraldton,” Mr Aldridge said.

“Our kids education is more important than 10 metres of rail and we won’t take a step backwards.”

To read the full comments from Labor Member for the Agricultural Region Darren West in hansard click here. 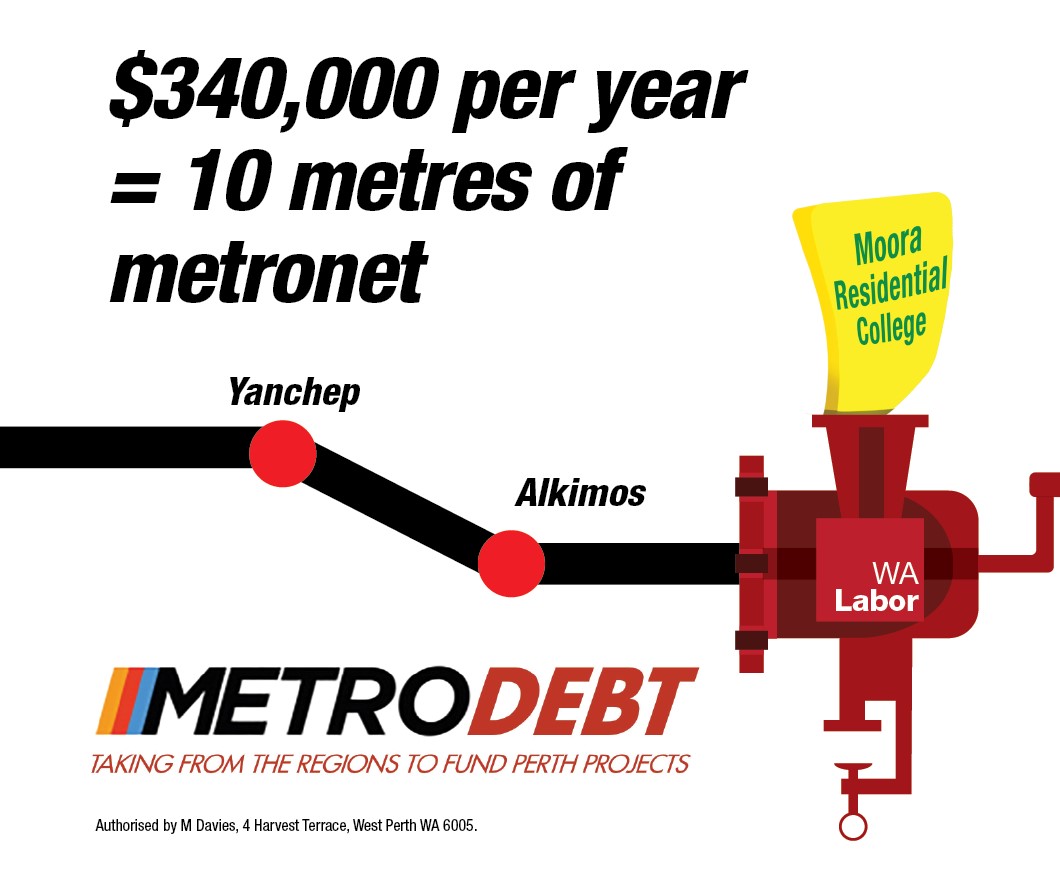