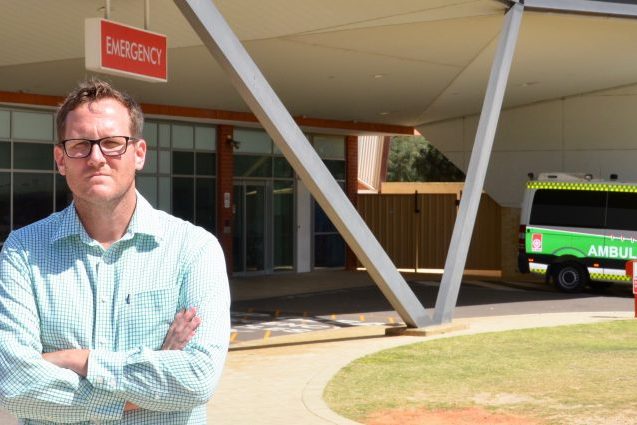 The Nationals WA have expressed outrage that patients presenting to Wheatbelt emergency departments in need of urgent medical care have no doctors available for emergency treatment.
Data received by health spokesman Martin Aldridge in Parliament this week show no doctors were available on 174 occasions across hospital sites at Merredin, Narrogin and Katanning in the year to June 2019.
Over the same period 415 patients triaged at the hospitals were classified at an Australasian Triage Scale (ATS) category of 3 or less, meaning they required medical assessment and treatment within 30 minutes.
Seven of those were classified ATS 1, meaning they required immediate treatment – usually resuscitation – with no doctors there to assist.
Mr Aldridge said a lack of funding and recruitment strategy from the McGowan Government left Wheatbelt and Great Southern hospitals seriously exposed through their inability to roster doctors in emergency departments.
“Merredin, Narrogin and Katanning hospitals are considered hub hospitals, based around regional centres and supporting nearby smaller hospitals with a higher level of care and capability,” he said.
“The current doctor shortage is an absolute indictment on the management of our regional health system by the Premier and Health Minister.”
“They continue to blame the Federal Government, the former State Government and just about everyone except themselves.
“Doctor shortages aren’t exclusively a State responsibility, but the McGowan Government must take leadership on this issue and do everything within its power to ensure GP vacancies are filled and patients are adequately cared for in emergency departments.”
According to Rural Health West there are currently 109 GP vacancies in regional WA and a need for a further 31 locum GPs.
Nationals WA Leader and Member for Central Wheatbelt Mia Davies said the McGowan Government’s response to the State’s growing regional health needs was appalling.
“Not only has this Government failed to deliver adequate services in emergency departments, they also have no attraction and retention plan for GPs,” she said.
“Many country communities are paying dearly to attract and retain GPs, with many smaller towns not having access to a GP at all.
“Meanwhile public health workers can’t continue working exhausting hours to try and maintain some level of service – but they will eventually reach breaking point.”