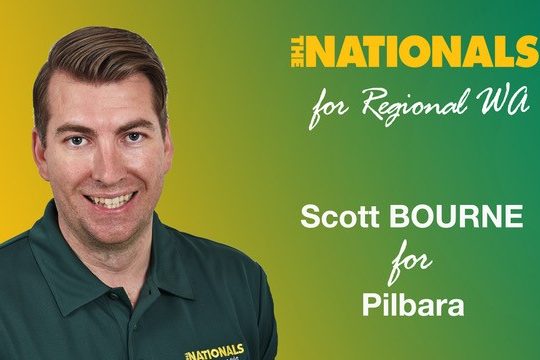 The Nationals WA have this week endorsed a strong local champion for the electorate of Pilbara ahead of the March 2021 State election.

Scott Bourne, a Dampier resident, was endorsed by the Party’s State Council at the weekend.

Leader Mia Davies said Mr Bourne was a quality candidate who understood the communities of the Pilbara.

“Scott has lived and worked in the Pilbara for 14 years, he is raising his family in the region and is invested in building and diversifying the local economy,” she said.

“The Nationals WA have a strong track record delivering for the Pilbara and there’s more to do. Scott will be working hard with our team to put the Pilbara back on the agenda.

“As we map out a State recovery plan for COVID-19, the people and industries of the Pilbara are in the box seat to help get WA back on its feet.”

Mr Bourne, 33, has been based in the Pilbara towns of Karratha and Dampier, living in the latter with his young family and working in occupational health and safety.

He is involved in local sporting clubs and volunteer organisations, including his local fire brigade, and has a passion for learning about and travelling to Pilbara communities outside his own.

“The Pilbara electorate is home to some of the nation’s biggest businesses, we have a strong mining economy, but we can do more to create liveable vibrant towns for those that generate that wealth,” Mr Bourne said.

“A shortage of GPs in Karratha and unacceptable wait times for patients to receive consultations must be addressed.

Mr Bourne said the cost of regional airfares remained an inhibitor to growth and connectivity for Pilbara residents.

President of The Nationals WA Steve Blyth said Mr Bourne was a strong local champion to represent the Pilbara.

“Our Party prides itself on selecting people who are prepared to stand up and fight for regional WA,” he said.

“We want Scott Bourne sitting around the decision-making table with our team of regional MPs arguing for investment in the Pilbara – he won’t just be another number in the Party room.

“He understands you have to fight for policies like Royalties for Regions and that The Nationals WA is the only Party that can deliver for his community.”