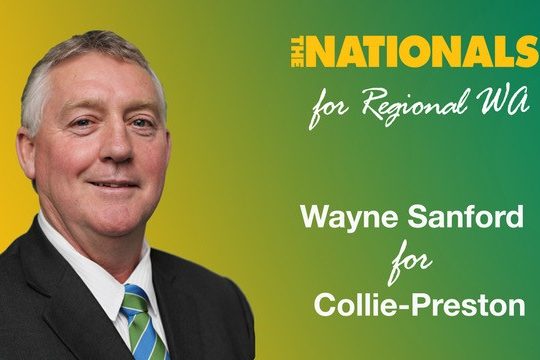 The Nationals WA this week welcome a new candidate to the regional Party’s growing team of local champions for the March 2021 State election.

Former Collie Shire president Wayne Sanford was endorsed for Collie-Preston by the Party’s State Council over the weekend.

Leader Mia Davies said Mr Sanford had spent his life living and working in Collie, bringing with him a deep understanding of communities and economies in the South West.

“Wayne is a quality candidate and a local leader who has dedicated much of his life to championing progress for the region he lives in and loves,” she said.

Ms Davies said she was confident Mr Sanford’s experience in local government, industry and regional development would make him a valuable addition to the team.

“We want candidates who are prepared to step up and fight for their electorate and regional WA, and Mr Sanford has a proven track record on this count,” she said.

Mr Sanford has worked for 38 years as an electrical instrument technician serving the resources sector. He said Collie-Preston was one of the most important areas in the South West.

“I’m passionate about this district. It needs strong advocacy and leadership to take it forward through an economic and employment transition – I want to play a lead role in that,” he said.

“The Nationals WA are a Party defined by geography, not ideology, and I’m looking forward to working with a team of regional MPs and supporters to put Collie-Preston on the agenda.

“Working with The Nationals team I’ll find investment and businesses to support the future wellbeing of people and communities in the district.”

As well as spending 16 years as a Collie Shire councillor, including 10 as president, Mr Sanford has served as a board member of the South West Development Commission, Bunbury Wellington Economic Alliance and was on the executive of WALGA.

He is an ardent supporter of progressive regional development and worked closely with The Nationals WA in government to administer Royalties for Regions funding that transformed the Collie-Preston electorate.

The Nationals WA President Steve Blyth said Mr Sanford was an excellent candidate for Collie-Preston, an electorate vital to the economic, environmental and social fabric of WA.

“It’s no coincidence Wayne shares our passion to ensure wealth generated in the South West is invested back into those communities,” he said.

“He’s acutely aware industries in his backyard – resources, energy, tourism and agriculture among them – are essential to helping our State get back on an even keel post-COVID-19.

“Royalties for Regions plays a key part assisting that recovery process, facilitating the standard of investment and support communities and industries need to rebuild and continue flourishing.”