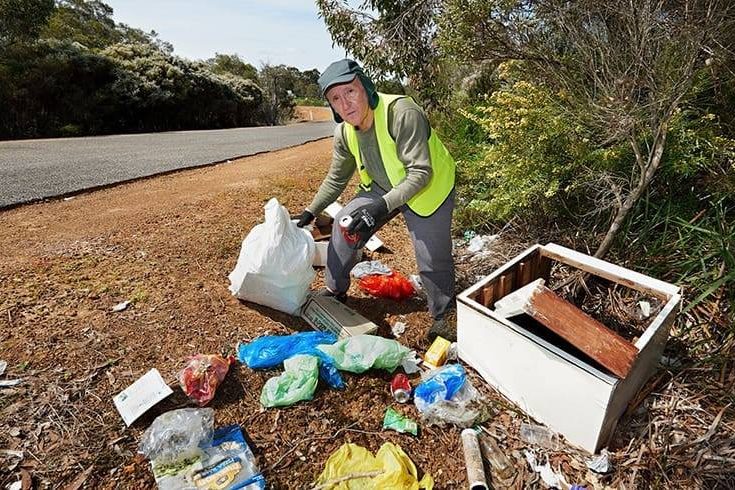 Member for Warren Blackwood, Terry Redman has called on the State Government to continue to make funding available for volunteer litter hero, Michael Filby, of Walpole.

The State Government, through the Keep Australia Beautiful Council, has for many years, given a small donation to Michael Filby for the ‘clean up’ costs of a 170 kilometre stretch of the South West Highway, however, this arrangement has come to an end.

Mr Redman said he had learned of the disturbing situation when Mr Filby contacted his office.   His treatment by the State Government is mean spirited at best and at worst a significant slap in the face for all volunteers who give tirelessly of themselves to the community.

“Mr Filby is well recognised nationally and applauded in the region for keeping the main highway litter free, a selfless task he has done for 15 years and mostly at his own expense.  He gives 11 hour days every week and incurs all the costs of his own vehicle,” Mr Redman said.

“Through Mr Filby’s efforts, he has assisted Walpole and surrounding towns win the Keep Australia Beautiful Council’s Tidy Town Awards on several occasions, and in fact, Mr Filby was awarded the prestigious Dame Phillis Frost award for his work on promoting ‘anti-littering’.

“Michael estimates that he has picked up 100 tonnes of rubbish creating the largest length of a main highway being free of litter in Australia.

“The highway is the gateway to the Walpole Wilderness which is internationally recognised as a biodiversity hotspot, as well as the world-famous Tree Top Walk.

“How can the State Government be serious about tourism if the road to our major natural attractions is littered with rubbish?

“Questions in Parliament this week showed the Government as shameful and not being prepared to recognise that the $1500 was the best value for money spend for the State Government.

“The Keep Australia Beautiful Council now requires Mr Filby as a volunteer to get an Australian Business Number and complete a grant application.   At seventy four, Mr Filby should not have to jump through hoops to secure a miniscule amount of tax payers funds to do what is simply an exceptional job.”

Mr Redman called on the Minister for the Environment to advise his bureaucrats to apply some down to earth common sense and restore funding support without all the red tape.