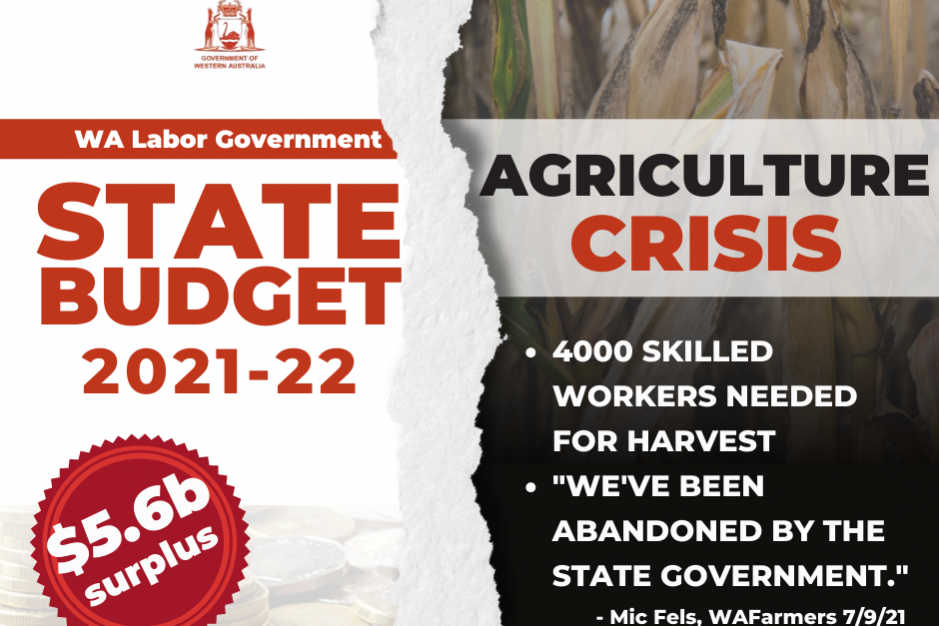 The Opposition has condemned the State Government for failing to plan or provide funding in the State Budget to secure workers for the agricultural sector ahead of a predicted bumper harvest.

Opposition Leader Mia Davies said it was shocking for the Premier to deliver an eyewatering $5.6 billion surplus with no answers for the grain sector who desperately need workers.

“Despite repeated calls from the Opposition and industry, it’s a blow to find out that there has been no work done to try and bring those necessary workers into the State,” Ms Davies said.

“With $5.6 billion in your back pocket, you would think a solution could be found for our State’s agriculture industry so growers can get on with what is shaping up to be a record harvest.”

Ms Davies said the sector had been abandoned by the Labor Government at a time of great need.

“Quite simply, the Minister has failed to do the work to secure a quarantine facility that is there for the taking,” Mr de Grussa said.

“It beggars’ belief that the Minister and the Premier are having a tussle over who should fund the facility when the Government has $5.6 billion tucked in the back pocket.”

Mr de Grussa said cost estimates for Bladin Village in the Northern Territory were around $15,000 per worker, with farmers and the agriculture industry willing to contribute to get access to vital workers.

“If every required skilled worker was found and quarantined, the total cost would be less than $15 million,” Mr DeGrussa said.

“The Premier is happy to tout a huge surplus – and he’s just as happy not to spend a cent on the agriculture industry, which provides $11 billion to the State’s economy each year.

“This is Labor abandoning West Australian farmers and turning its back on regional communities and families.”