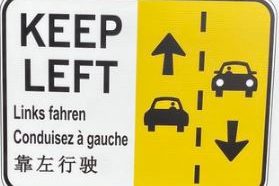 The signs remind drivers to keep left in German, French and simplified Mandarin.

“Given the popularity of Kalbarri and Pink Lake within the Northampton Shire, I wrote to the Road Safety Minister last month requesting multilingual signage on George Grey Drive also,” Mr Love said.

“I made the suggestion that directional arrows be painted on the road to also remind drivers to keep left.”

“The New Zealand program is extremely comprehensive and serves to educate visiting drivers before they leave their country, in-flight, on arrival and at the stage when they are collecting a hire car,” he added.

“Such a program is desperately needed with the government recently confirming that crash statistics from 2014 to 2018 showed international drivers are 35 percent more likely to be involved in head-on crashes, particularly where those drivers are used to driving on the right side of the road.”

Mr Love said promoting WA as The Road Trip state brought with it an obligation to ensure local and overseas drivers remain safe.

“I commend the Road Safety Minister for ongoing road upgrades on Indian Ocean Drive but remind the government that there is a desperate need to commission the Jurien Bay helipad.

“Joondalup Hospital is 200km from Jurien Bay and at present we are reliant on the terrific work of volunteer ambulance officers transferring patients to Perth by road.”